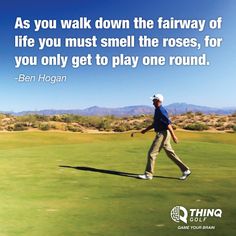 For as long as golf has been played, the game has meant different things to different golfers. While a professional might brood about a round requiring 75 shots, an everyday hacker might take great delight in shooting an 18-hole score of 95.

Why the difference? It’s all about the mental approach. Golf is, superficially, a physical sport – there’s as much as seven miles of walking involved in playing 18 holes, plus the highly tuned action of swinging a club with a sound technique – yet the long-held viewpoint on the game is it is only 10 percent physical and 90 percent mental. The best professional golfers in the world are all capable of executing the wide array of shots necessary to compete at the highest level; what separates them lies in the six inches between their ears.

‘At One’ With Nature

Mentally, golf is beneficial in several key areas: for social interaction, for exercise, to aid concentration, and to spend time in natural surroundings. That intangible last point cannot be undersold. A University of Washington study on how outdoor activities surrounded by nature affect the mind found, among other things, that “the experience of nature helps to restore the mind from the mental fatigue of work or studies, contributing to improved work performance and satisfaction.”

Golf helps mentally in other ways, too. Rocker Alice Cooper turned to golf to overcome his various addictions and, in turn, found another, far healthier one. Playing as many as 36 holes a day created a welcome distraction for the “Godfather of Shock Rock,” whose game became so good, at one point he was only a breath behind playing at a pro level. “Some people turn to God, I turned to golf,” Cooper famously quips.

Post-traumatic stress disorder is a mental ailment commonly associated with returned armed forces personnel. Seeing the benefits of introducing sufferers to the golf course, the Professional Golfers Association of America has partnered with doctors and therapists in recent years to use the sport as a remedy. And the upsides are emphatic.

“Since implementing the game of golf into our programs, I’ve observed that some of the participants still desire to continue playing the game and developing their skill,” says recreation therapist Penny Miller. “Golf is used as a therapeutic treatment modality, to help patients restore, remediate, and rehabilitate to improve functioning and independence in life activities, as well as to help the patients integrate back into society.”

“We see patients presenting symptoms of their medical conditions to include: insomnia, lack of concentration, anxiety, and inability to form social relationships. The golf clinics that have been implemented over the past two years have involved about 30 patients. Golf is used as a vehicle to support patients psychosocially.”

“One of my concerns is that people say that this is just golf,” adds neuropsychologist Dr. Michael Hall. “It is not just golf, it is more than golf. Golf is a venue again to create a positive environment, positive experiences. Sometimes that is the only time I see that emotion. Granted, I am focused on problem areas, but it’s a big deal. It’s not something that shouldn’t be dismissed because it’s golf.”

In much the same vein, “Jim” is a golfer who goes by the poignant online name of “The Grateful Golfer” after launching a blog that played a role in assisting him to overcome cancer. He did so by focusing on improving his mental strength and “the positive aspects of golf, interacting with like-minded golfing fanatics, and to have a constructive exchange about all things golf.”

“Golf has helped me focus on the four pillars of wellness: healthy eating, moderate exercise, stress relief, and good quality sleep,” he writes.

The physical elements of playing 18 holes should not be glossed over. Golf works your gluteus maximus (butt), the pectoralis major (chest), latissimus dorsi (back), forearms, and core muscles. Plus, golf is one of the least injury-prone sports people play.

A study conducted by Neil Wolkodoff, the director of the Rose Center for Health and Sports Sciences in Colorado, ascertained that walking for a full round while carrying a golf bag burns 1,442 calories. Conversely, riding in a cart nearly halves that figure (822). Walking with a pull buggy burns 1,436 calories and walking with a caddie carrying the bag burns 1226 calories.

The same study added that burning 2,500 calories per week – so, less than two full rounds of golf played while walking – can greatly reduce the risk of heart disease, diabetes, and cancer. Yet perhaps the best news came from a Swedish study conducted by the Karolinska Institutet, which found golfers enjoyed a 40 percent lower death rate when accounting for other factors such as age, gender, and socioeconomic status. The Swedes determined the golf factor alone contributed to an extra five years of life expectancy.

Our vision is to improve the health and wellbeing of local communities by introducing them to wonderful world of golf. View all posts by golfinsociety (CIC)